The Founder of MSUB

The Maharaja Sayajirao's Grandson was Sir Pratapsinh Rao Gaekwad, who founded The Maharaja Sayajirao University and settled the trust as desired by his Grandfather. This Trust known as Sir Sayajirao Diamond Jubilee and Memorial Trust exists today also and caters to the educational and other needs of the people of the former state of Baroda.

Shrimant Maharaja Sir Pratap Singh Rao Gaekwad (29th June 1908 – 19th July 1968), belonging to the Gaekwad dynasty of the Marathas, was the last ruling Maharaja of Baroda. He succeeded to the throne upon the death of his grandfather Sayajirao Gaekwad III in 1939. In 1947, British India was partitioned into two independent dominions, and Pratapsinh acceded his state to the Dominion of India. By 1949, Baroda had been merged into India.

Pratapsinh retained his title and certain privileges, but in 1951 he was deposed by the Government of India for allegedly irresponsible behavior. He then retired to Europe with his second wife, a woman of notorious reputation, and settled in Monaco. He died in 1968 and was succeeded by his eldest son, Fatehsinghrao Gaekwad, who had been officiating as Maharaja since 1951.

Pratapsinh founded the Maharaja Sayajirao University of Baroda in 1949, as per the wishes of his grandfather, Sayajirao, and settled the "Sir Sayajirao Diamond Jubilee and Memorial Trust", which still exists, providing for the educational and other needs of the people of the former Baroda State. 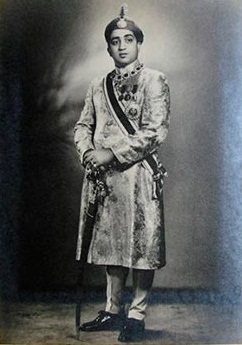 Pratapsinh was a hedonistic spendthrift who tended to squander his state's money. He had inherited an estate that was conservatively valued more than $US300 million (in 1939 dollars), which included an assortment of jewelry with an estimated value of $US15 million. He went on a six-week tour of the United States in 1948, where he and his second wife were welcomed into the salons of high society. They spent a reported $US10 million during their visit to America. The Indian Government did an audit of Baroda's treasury after the widely read news reports. The auditors concluded that the Gaekwad had taken several interest-free loans from Baroda's treasury which they considered inappropriate. He agreed to pay the money back in yearly installments from his income of $US8 million.

When British India gained independence from Britain as two new dominions, both sought to absorb the princely states. This was a thorny issue, as technically the Princes were independent rulers, and their states were private domains. The British withdrawal from India left a vacuum, with the British releasing the princes from their subsidiary alliances. However, most were militarily weak, and within about a year pressure from the new countries of India and Pakistan had resulted in most of the maharajas and other princes acceding to one of the two. Pratap Singh was so distraught after he signed the Instrument of Accession for Baroda that he wept in the arms of V. P. Menon.

His father was Fatehsinghhrao Gaekwad, and his mother was Padmavati Bai Saheba. His father was heir apparent but died at the age of 23 before he could ascend to the throne. Fatehsinghrao was a disappointment to his parents. Fatehsinghrao's father, Sayajirao Gaekwad III, abstained from alcohol, but Fatehsinghrao was a heavy drinker, which may have contributed to his early death. Sayajirao was also disappointed in his son's mediocre academic performance, which he attributed to his children having so much wealth and too few goals.

Pratapsinghhrao married twice. In 1929, he married Shantadevi (1914-2002), the daughter of Sardar Mansinhrao Subbarao Ghorpade of Hasur in Kolhapur state. The couple had three sons and five daughters:

In the early 1940s, Pratapsinhrao fell in love with a glamorous married woman, Sita Devi, who was the mother of one child already. He married her in 1943, after she had secured a divorce from her husband by ingenious means. This was in defiance of the anti-bigamy laws that his grandfather had imposed, and Sita was considered ill-suited for the exalted role of his consort. The couple had one son, Sayajirao Gaekwad (8th March 1945 – 8th May 1985), who died unmarried.